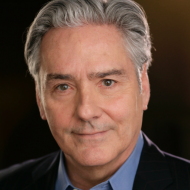 He is the founder and principal of MICHAEL BALDWIN INC, which offers best-in-class corporate and personal branding and executive coaching. Michael helps individuals, companies, and brands Be better ®.

Michael spent eight years with Ogilvy & Mather New York, where he was the Worldwide Account Director for the $500 million IBM account. He also managed the global SAP account, where he led the integrated communications campaign and built a global team in over 40 countries.

He is a highly decorated creative professional, having won the David Ogilvy Award for his leadership on the SAP global brand campaign and a Cannes Gold Lion, Clio, British D&AD Silver, and Ad Age’s “Best of the Year” TV Campaign award for copywriting on Apple.

Michael has held posts at other top agencies, such as Ammirati & Puris, BBDO, and FCB, where he headed up campaigns for Apple, Compaq, Ashton-Tate, and NeXT.

Michael also offers a one-of-a-kind presentation workshop that turns presenters into truly effective communicators. He has developed an entirely original way of enabling people to put the focus of a presentation back where it belongs—on the presenter. He is the author of Just Add Water ®: An incredibly easy guide for creating simple, powerful presentations.

Michel has a B.S. in Chemistry from Beloit College in Wisconsin, studied professional acting at the William Esper Studio, and lives in New York.