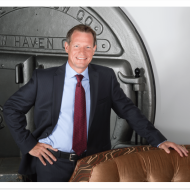 At age 16, Larry Janesky achieved the Eagle Scout rank.  He went on to earn six palms with 53 merit badges.

Larry started his entrepreneurial passion as a teen, being involved in several ventures including a very large paper route.  After graduating high school, he started his own business “Carpentry, call Larry, no job too small.” This lead to the building of his first house at age 18 and 23 additional homes in the five years after.

When the building boom of the time collapsed, Larry started a basement waterproofing business.  Within two years, in 1990, he was developing products for the industry and developing a dealer network of contractors to use those products across North America.

Larry has invested heavily in his facilities to provide a unique and fun place for his employees to work.

Larry’s sphere of influence has positively affected the community with jobs being created, large buildings built and occupied.  He provides business for many suppliers to his 150 million dollar per year business.

Larry has initiated many service projects over the years; notably the complete construction of a large public playground at the Ansonia Nature Center, and the restoration of a church in Bridgeport.  He and his wife Wendy sponsor seven inner city children to attend a private school.

Larry is a teacher at heart.  He has written many books, audio recordings, and taught thousands of people in his classes over the years.  Currently he is completing writing the three year curriculum for his School of Entrepreneurship. Larry has written a daily blog called “Think Daily” and “Think Daily for Businesspeople” every weekday for the past ten years.  Think Daily is free and has 27,000 subscribers. (Sign up at http://www.thinkdaily.com/)

Larry and his wife of 26 years have three adult children, Tanner, Chloe and Autumn.  Larry is an avid motocross rider. As a team, he and his son won the Baja 1000 in 2015 - the longest non-stop cross country race in the world (1000 miles +/-).  The documentary “Into the Dust” (https://youtu.be/YYaQLS-7ejU) chronicles their race.

Sites to check Larry out on: