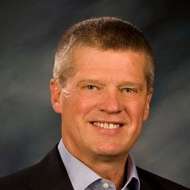 Keith started as a sales rep at Thompson Marking Service in 1978.  In 1981 he became the general manager of the company, soon thereafter the president.  In the 1990s Keith bought out the founder of the business and became the sole owner.  The business was renamed American Retail Supply.  In December, 2015 he sold the business for millions more than similar businesses in the same industry.

Along the way he started three other businesses and still owns them today.

Through the 1980s Keith grew what was to become American Retail Supply at a fantastic rate.  The business that employed 5 had grown to 17, and like lots of business owners he was at his wits end.  He felt like a slave to his business.  It seemed like he was always responding to things and taking care of problems.  He had no time for himself and just flat was not having any fun.  He even thought about throwing in the towel and going back to sales.

But Keith is not a quitter, so he went looking for the answer.  He studied all of the management gurus and when he didn’t find what he needed he invented it by molding the best of what he found into a system designed exclusively for small business owners.

Discover how to create highly productive team, manage your entire team in one hour a week so you can work on the important in your business, have fabulous life outside of work, and then - when it’s time - sell your business for millions more.

Believe me I know what it’s like. I’ve been there, with you, in that same conversation - whenever you get together with other business owners the conversation always gets around to the headaches — trying to get your employees functioning as an effective team and functioning at a high level as individuals and, in general, getting things done consistently right by system, rather than by fighting fires and fixing mistakes.

In fact, not to long ago, I was in one of those little get-togethers and someone asked me about my employee problems. When I said, “I don’t have employee problems” they all laughed. They thought I was being sarcastic.

But then afterwards a couple of them asked me if I was serious - if I really don’t have employee headaches. They asked me for the secret. I told them, it’s really not a secret, it’s the systems we have in place. They literally begged me – guilted me – into writing my book, “Performance Reviews Suck

Things just don’t seem to change - But they can...

What would it mean to you if you could get all of your employees functioning as an effective team and functioning at a high level as individuals and, in general, getting things done consistently right by system, rather than by fighting fires and fixing mistakes?

“Keith’s program has provided us with a framework for our team-members to OWN problems in the practice and solve them, creating systems in the process! It’s a complete 180-degree turn from what was happening, with ME, the business owner (or my office manager), being burdened with every problem, and ultimately being forced to handle it, often, in a manner, the staff would disagree with.
Dr. Sean Tarpenning DDS-Eau Claire, WI.

WHO I HELP
Anyone who understands that they need to manage the performance of their team but hates Performance Reviews.