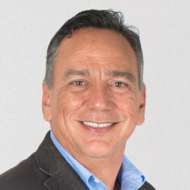 Born in Brooklyn, N.Y. and raised on Long Island, Jaime DiDomenico moved to Florida in 1981 looking for work after a not-so-successful stint at Hofstra University. He took a position as a warehouse clerk at Encore Service Systems (now called Service America) in Boca Raton.

“Encore serviced homes in South Florida,” he says. “That’s where I learned about parts and purchasing of HVACR, plumbing and appliance parts.”

A year later, DiDomenico had the opportunity to move from the warehouse to the accounting department where he began to thrive. First as a clerk, then as an accountant before becoming accounting manager in 1984. With supervisory responsibility over payables and receivables, DiDomenico acted as an assistant to Encore’s controller.

Though Hofstra may not have worked out for him, he gained real business experience in Florida — and gave college the old college try again. He earned both a bachelor’s degree in business management and a master’s degree in accounting from Nova Southeastern University. In 1992, he passed the CPA exam.

When the company was purchased in 1993 by Roto-Rooter, he seized on an opportunity to move into operations management as a branch manager in West Palm Beach.

“After a few years there, I was hand-picked to join a consolidator, BlueDot, as a vice president,” DiDomenico remembers. “That expanded my boundaries as I learned how to manage multiple locations in several states.”

It was the opportunity with BlueDot where DiDomenico first came across N&M. He purchased the company for BlueDot in 1998, then later purchased it again for himself and a couple of partners in 2004.

Although N&M had been around 41 years at the time, it was a small $2 million residential service and replacement company with about 16 employees.

It’s been at N&M — first rebranded as N&M Cool Today, and then as simply Cool Today — where DiDomenico has found his true passion: people.

“I love people. I especially love seeing people grow and succeed in their careers and personal lives,” he says. “We are a people business, and if you don’t love dealing with people, you will struggle to deliver a strong, binding mission that promotes teamwork and growth.”

Throughout his time as president of Cool Today, DiDomenico has continued to take risks like a true entrepreneur, while continuing to maintain long lasting relationships with customers, team members and the community.

The business has had it’s challenges over the years — poor timing of a new construction division in 2006, growing too fast for infrastructure and cash to catch up, changing direction faster than team members could adjust — but DiDomenico recognizes it’s all been a direct result of his goals.

“I am a trained professional in accounting and management, but I yearn to build things, grow things and create opportunities,” he says. “To do this on a larger scale, you have to step up, put your personal investments on the line, put an enormous amount of time and effort and risk everything financially and possibly your reputation.”

Cool Today joined Nexstar in 2010, focusing on great trade expansion, bringing customer relationships to the forefront and investing in training for its people — something that has helped Cool Today grow three times in the past seven years.

What started in a market area of about 700,000 has now expanded into an area of more then 3.5 million.

“I see us becoming well established in the entire Tampa Bay market,” DiDomenico says. “This includes our original home base of Sarasota, our new venture in Dunedin (Pinellas County) and our most recent acquisition of Alert Air Conditioning in Tampa, Fla.”

DiDomenico has created an atmosphere and culture that is poised to handle the technological challenges this industry faces. He firmly believes smart home technology will be ever present and widespread in 5 to 7 years — and large technology companies are trying to solve the complete-serve challenge to the homeowner.

“How we’re addressing this, or preparing for it, is to not resist change, but embrace it where possible,” he says. “We’re getting in the cage with the tiger to feed him, and hope he never mistakes the steak for the handler.”